Part 33 includes a colour plate showing the new Tyne Bridge at Newcastle. It formed part of the article on Bridges Across the Tyne.

This week’s cover picture, reproduced by courtesy of Dorman Long & Co Ltd, shows part of the arch of the New Tyne Bridge at Newcastle, during construction. The procedure adopted in building this bridge was the same as that used in the construction of Sydney harbour bridge - the tow half-arches were built out simultaneously and anchored back by great steel cables, some of which are shown in the cover illustration. 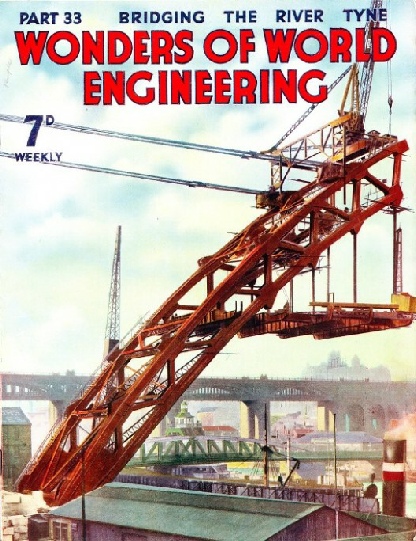 Bridges Across the Tyne

The bearings in which moving parts of machinery are supported have to withstand many different kinds of stress. The utmost care, therefore, has to be taken in the manufacture of these vital components. The ball bearing is a small component which has probably done more to reduce friction and wear and tear in machinery than anything else perfected by the engineer. This chapter describes the many fascinating processes used in the manufacture of ball and roller bearings. The steel balls used for certain types of bearing are guaranteed to an accuracy of one ten-thousandth of an inch, and they are graded by a machine which will detect a difference in diameter of one twenty-five-thousandth of an inch. This is the eleventh article in the series on the Romance of Industry.

A Battery of Presses

BATTERY OF PRESSES in which are formed the cages that house the balls or rollers in the rings of a bearing. The cages are pressed from strips of steel plate with dies of a complicated pattern. Cages sometimes require four or five pressing operations before they are made.

FIVE BRIDGES span the River Tyne at Newcastle within a reach of less than a mile. The new Tyne Bridge in the foreground had a clear span of 531 feet and was opened in 1928. Behind it are the Swing Bridge, the High Level Bridge, King Edward Bridge, and Redheugh Bridge. King Edward Bridge is a railway bridge; the High Level Bridge is for road and rail; the others are road bridges.

Rising to a height of 200 feet above the river, the single-arch span of the Tyne Bridge at Newcastle is the largest in Great Britain. The approach spans carry the road over the streets and houses, giving the bridge a total length of 1,254 feet. The roadway is 38 feet wide and there are 9-feet footways on either side. The great steel arch has a span of 531 feet. The Tyne Bridge was opened by His Majesty King George V on October 10, 1928.

The story of the development of one of the largest industries in the world, concluded from part 32. This is the second article in the series Invention and Development.

The second part of the Story of the Cinematograph appears in part 35 and part 36.

Bridges Across the Tyne

A remarkable group of bridges in or near Newcastle carries the traffic across the River Tyne. The most recent of these is the largest single-arch bridge in Great Britain. This chapter on Newcastle’s bridges across the Tyne describes five different bridges, which are crowded into a distance of less than one mile. One of these bridges carries the London and North Eastern Railway across the Tyne on its way to Scotland. The first bridge to have been built across the Tyne is believed to have been the work of the Roman emperor Hadrian in the year 120; the most recent - Tyne Bridge - was opened by King George V on October 10, 1928. This bridge is the subject of a colour plate (shown below). The article is the eleventh in the series on Linking the World’s Highways.

As the steam locomotive goes flashing by it flaunts its coupling rods, and also its connecting rods, if it has outside cylinders. The axles are driven by these long shining rods, but in the motor railcar there is nothing to indicate what drives the wheels. The photograph here reproduced shows the driving axle of one of the latest LMS railcars.

This coach, which carries forty passengers, is capable of travelling at fifty-six miles an hour when required and can accelerate so rapidly that fifty miles an hour can be attained in forty-nine seconds from starting. Inside the coach there is no sign of an engine. At either end a glass partition cuts off a corner for the driver. All that there is to be seen is a pedestal decorated with a few push-buttons and knobs and a hand-brake lever. The longitudinal members of the main frame on which the bodywork rests are seen towards the top of the illustration. At the bottom is the driving axle, of which only one wheel is visible. The coach has four wheels, but only one axle is driven. 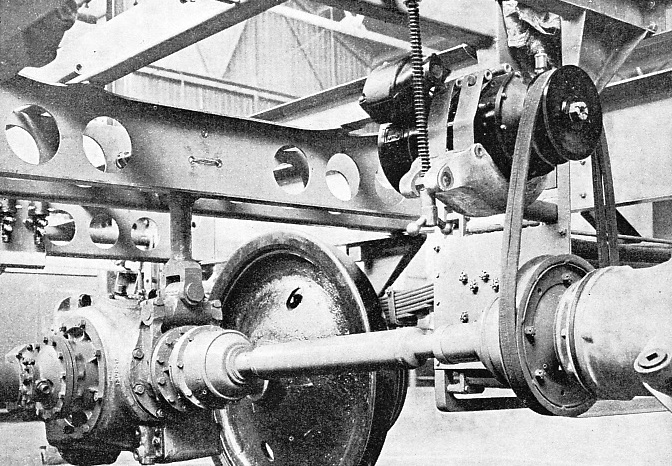 The engine is not in the picture, but it is suspended below the frame on the right and is a six-cylinder compression-ignition engine running on heavy oil and capable of developing 130 horse-power. In the same way as a motor-car engine it runs only in one direction and at an approximately constant speed, so that speed changes and reversal have to be effected by means external to the engine. Speed change is done not by gears, as in a motor car, but by what is known as a hydraulic torque converter. A small portion of the converter is seen at the extreme right. Briefly, it amounts to a combination of a centrifugal pump driven by the engine and a turbine on the propeller shaft, the one driving the other by means of an oil stream. The amount of oil circulated can be altered at will so that the speed of the propeller shaft can be varied relatively to that of the engine. The belt seen on the converter coupling drives a dynamo which charges storage batteries having a capacity of 200 ampere hours at 24 volts. The batteries supply current for lighting, for the various magnetic controls and to the starting motor.

The gearbox on the axle at the left is the reversing gear. The propeller shaft ends in a bevel pinion which meshes with two bevel wheels running loose on a shaft. A sliding clutch-pinion is made, by means of an oil cylinder, to engage with one or other of the loose wheels and, according to which is engaged the axle is driven to give a forward or reverse movement to the car. Brakes, actuated by servomotors, are fitted to all four wheels.

This is the nineteenth article in the series on Modern Engineering Practice.

The Engines Fitted in HMS Wanderer

RETURN CONNECTING ROD ENGINES were widely adopted in the middle of the last century, before high-speed vertical engines came into use. The illustration shows a model of the engines fitted in HMS Wanderer, built in 1855. The engines had two cylinders with a diameter of 45 in and a stroke of 24 in. With steam at a pressure of 20 lb the engines ran at over 80 revolutions a minute and indicated over 700 horse-power.

Simplicity of design is a modern tendency of engineering in practice. Such structures as aircraft hangars and bridges can now be efficiently and economically built from sections or units of a standard pattern. Engineering practice to-day tends towards simplicity of design, so that structures of all kinds may be quickly built up. This is particularly true of the building industry, and an excellent example is afforded by the wide use made of steel scaffolding. This chapter deals with the use of unit construction in engineering. It describes the building of an aircraft hangar from a series of standardized units erected in the form of diamond-shaped panels. Unit construction makes transport of the necessary components a simple matter, and it is adaptable to buildings of widely differing sizes. Temporary bridges, also, may be built from standard units. In 1936 a masonry arch bridge in North Wales was washed away by floods, and a temporary bridge was ordered on the understanding that it was to be in service within two and a half weeks. The steelwork was delivered within fourteen days, and three days later the completed span was in position. Several bridges of this type have been shipped abroad.

AERIAL ROPEWAY for transporting sand at the gravel claims of the Hollinger Consolidated Gold Mines Limited, Timmins, Ontario. The town of Timmins, named after one of the pioneers, is the centre of the Porcupine Area. This district and the Kirkland Lake Area produce more than half the output of Canada’s gold. 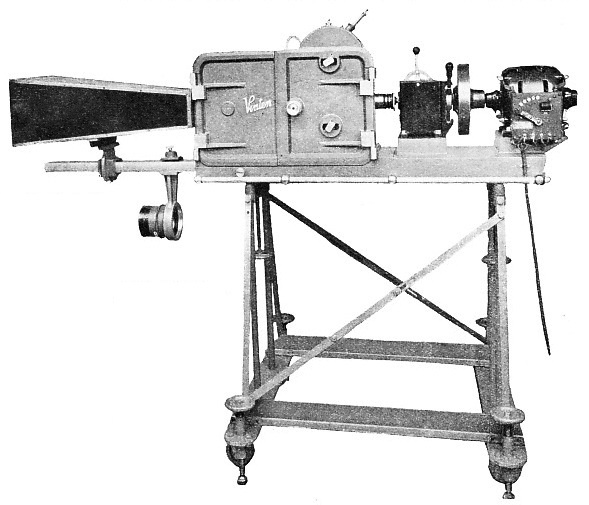 HIGH-SPEED CAMERA for slow-motion photography. The film travels through this camera at a speed of 120 miles and hour from spools rotating at 15,000 revolutions a minute. When films taken by this camera are projected at normal speed, the reduction factor is 125. Thus a film taken in one second occupies the screen for more than two minutes. 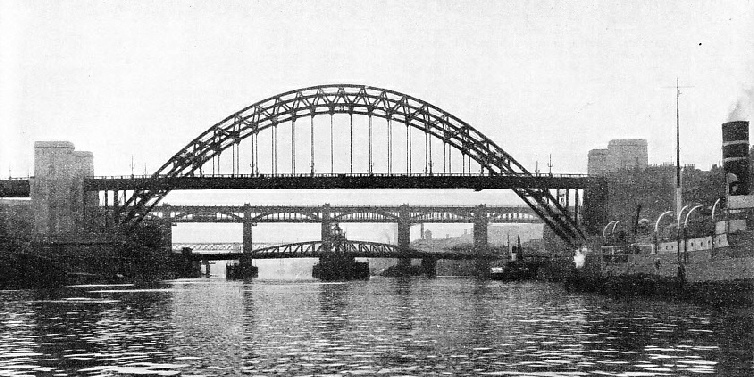 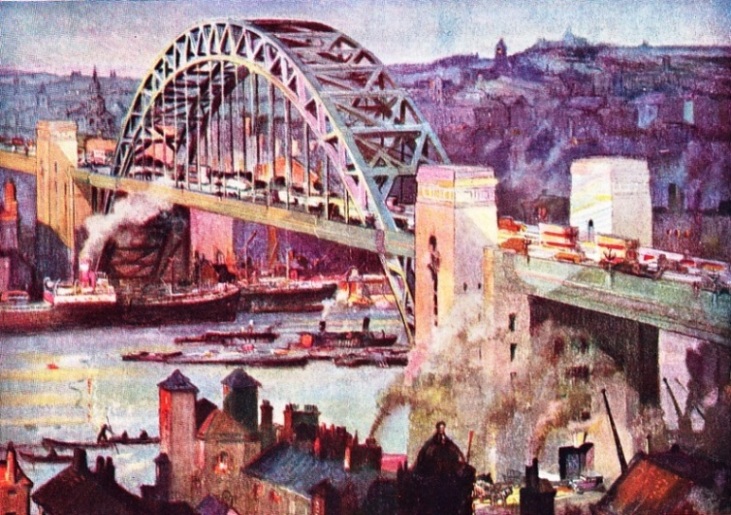 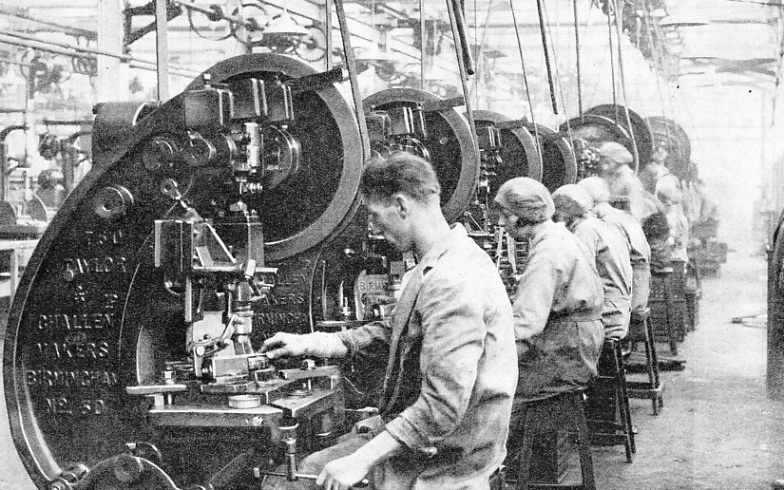 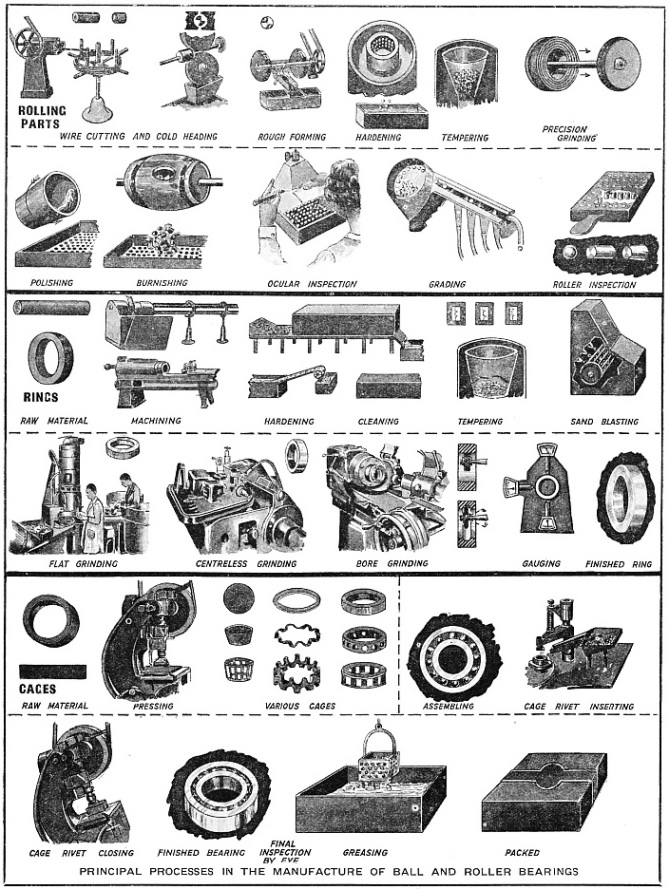 In the century which followed William Symington’s first application of a steam engine for driving a vessel’s paddle wheels enormous advances were made, not only in ship design but also in marine engineering. The development of the marine engine has made possible the vast ocean liners of to-day. The steam reciprocating engine brought about a revolution in marine transport during the nineteenth century, and the story of its development is described in this chapter. This is the third article in the series Invention and Development.

If you are interested in reading more about marine engines, there is a useful series of articles that appeared in Shipping Wonders of the World. 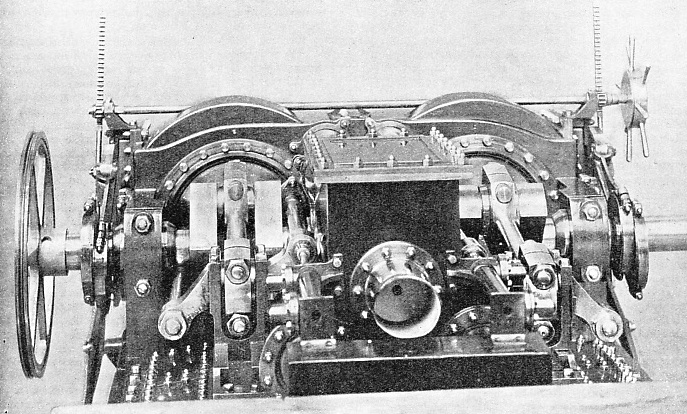 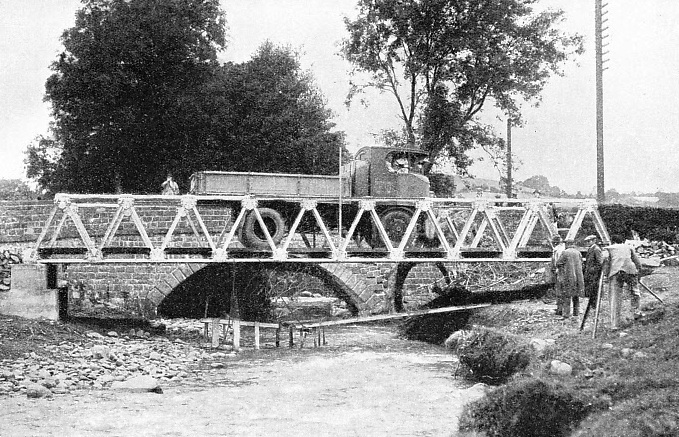 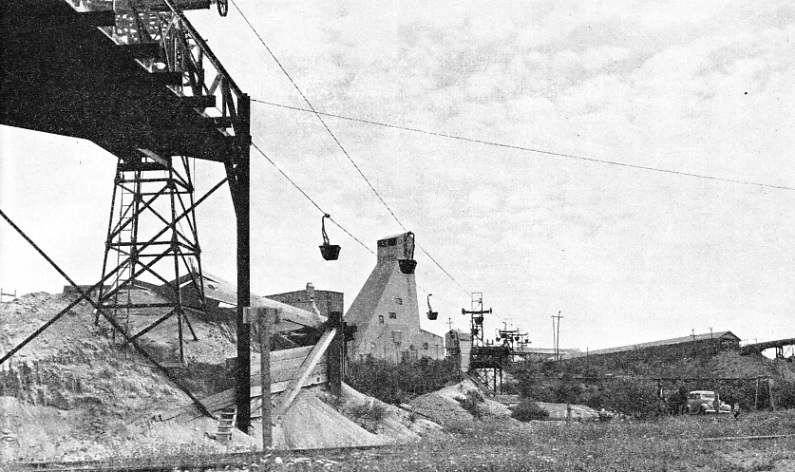 TESTING A UNIT-BUILT BRIDGE of the Callender-Hamilton type with a 10-tons wagon. This bridge, the first of its kind in Great Britain, was erected in 1936 at Dulas, Montgomeryshire.

The production of metal in Canada has increased in recent years to such an extent that mineral production in the Dominion is now second only to agriculture among the primary industries. Use is made of aircraft, railways, tractors and power-driven craft in reaching the metal treasure hidden in the earth. This chapter describes how Nature has been conquered by the use of aircraft, tractors, marine railways to by-pass rapids, power navigation of the vast inland waterways, radio and the most advanced types of mining equipment. Canada’s output of metal has multiplied tenfold since the beginning of this century, and much of this wealth comes from regions that were once called “the barren lands”. Nowadays mineral production in Canada is second only to agriculture, thanks to the work of the engineer. This article is concluded in part 34.